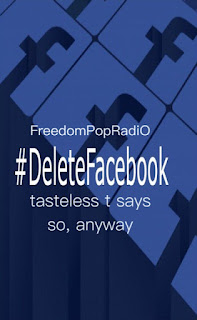 It's not conducive to a healthy mind, body and spirit.


It was a Harvard thing, then expanded to all colleges.

Then Zuck-a-dick’s jewish eyes started smiling, he dropped out of college and facebook was opened up to everyone.

I honestly could give a shit about all social media. I used myspace because a lot of indie bands were on it and my first radio project was about supporting independent artists. (Fucking babies)

Facebook was just filled with douche bags that thought they were the shit.

Little did these people know that facebook was selling personal information to third party advertising companies.

Since I had an online radio station my partners at the time created a profile for me.

Now I don’t care about my personal information being out there because I never held back. I pretty much put it all out there, but it’s not cool for others who don’t.

After they started to take down my political and view point and honest posts.

Then I saw how many friendships, partnerships and 20 year long marriages were torn apart because of facebook.

Well, I guess the destruction of marriages wasn’t the worst thing…

Then I started to notice that some of my comments and posts were turning people off to the point of unfollowing me.

That unfollow power trip for people became so serious that people thought they were unplugging your life support machine by unfollowing someone.

“There, see how you like it when you notice one less follower”. Fucking idiots…
Oh then there’s the ‘I’m a relationship with X section. You go out with someone for 3 dates and the next thing you know you get a notice that you’re in a relationship with a crazy person. What’s worse is when they tag you and all of your friends too.

Which reminds me… If any guys share a facebook profile with their girlfriends, I would like you too know that your balls are currently placed in a purse your lady keeps in the back of her closet.

Oh and ladies, don’t think you got your man on a leash. Chances are he has a facebook page you don’t know about. It most likely has his dick as his picture with the screen name, ‘ladies eat this dick’, one word.

Oh and for all the movie watching want to be gangsters, stop flaunting the money you just stoled or earned selling drugs on facebook live. You’re not tough or cool… You’re a fucking retard. My first abortion would have known better.

And please guys, stop with the shirtless pics inside an expensive car. Nobody cares and no-one believes you.

Also if you take selfies at work posting that your grinding, you’re not special. That’s what a man is supposed to do.

Besides if you have time to take selfies at work, then you’re not really working all that hard. Also, no-one cares and again no-one believes that your lazy ass is actually working hard or working at all.

Facebook blows, get off it, delete your app, but unfortunately that's all you can do. Because it is impossible to completely erase yourself from facebook. 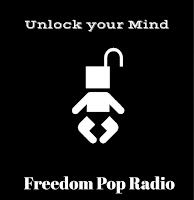 That’s what happens when you don’t take a few minutes to read before agreeing.

Don’t feel bad, I didn’t read the terms and conditions section either. I just clicked the box.


Thanks again for your time and support.

'Blog by tasteless t for FreedomPopRadiO.com